MIXMUX Duo is a dual agile sequencer with a focus on playability for all kinds of live performances. Apart from that, it is also a tool for creative studio work by playing with the unexpected in between. It rhythmicizes the notes of incoming MIDI chords and creates diverse variations within a composed framework by intermeshing methods of generative music with musical constraints.

The basic concept of Mixmux Duo follows the structure of a Dj setup, which finally makes the device extensively controllable with 3 faders only (Player A+B and Crossfader).

The playback logic resembles that of an arpeggiator but can additionally be adjusted in a way similar to a step sequencer. This allows it to be much more flexible than both the arpeggiator and the step sequencer, thus making it the perfect instrument for live performances of electronic music as well as creative studio processes with Ableton Live.

How it works: The basic principle behind it

The incoming notes are used as input for two separate agile sequencers, in which no static sequences are defined, but variable patterns of how, when and with which probability the notes will again be produced as output. Similar to a DJ setup, the crossfader ultimately determines which notes will actually be played by which sequencer.

With Mixmux Duo, musical creativity is not just about adjusting sliders or knobs, but about playing or performing your own expandable basic compositions. Simply follow your mood and inspiration or interact with other musicians, and your music will come to life. 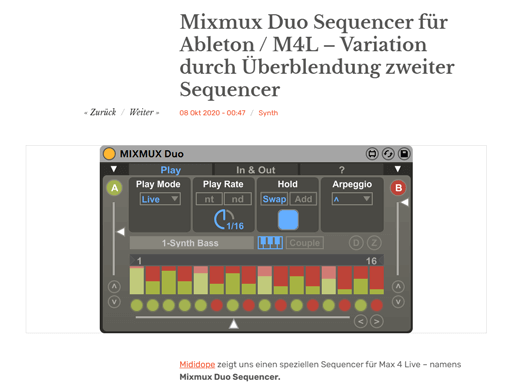